Recently, I started reading a 19th Century novel, The Black Coats: The Parisian Jungle by Paul Feval, and translated by Brian Stableford. Predictably, the book offers a very olden writing style. Omnipotent, with numerous interruptions from the author slash narrator, and frequent point of view jumps between characters. This makes for a somewhat hectic read. But.

The core ideas, the quality of prose, the way the action unfolds, they are all very modern and relevant. Because essentially, as humans, we have not changed that in the past 30,000 years, even as our culture and technology and society flourished, mutated, morphed, and changed. Which brings me to my question. Are books being written today and hailed as masterpieces still going to hold water a century from now, or even later?

There are some amazing literary works written five hundred years ago, and still held in highest esteem and regard, both by professional and amateurs. Books remain in print, and theaters are abuzz with plays embedded in the ideals and plot told by people who never knew anything about antibiotics, cars or touch-based smart devices. We sure can relate to what the story tells, the same way we can relate to ancient Greeks, Romans or the Bible, simply because the concepts of humanity remain the same. But the delivery mechanism are not.

Looking at The Black Coats, it tells a cunning story, for sure. But there are moments where boredom threatens the brilliance. The pace is a little slow for the modern era, and the fact someone is telling you the plot, and you are aware of the fact, can somewhat ruin the experience of immersion in the fictional world of the Paris underground. If we look at Tolkien’s work, there’s no mistaking the genius, but you sure cannot compare his writing to any modern author. In fact, no modern author would be able to pull it off by using that kind of prose today.

Does that make it better or worse? I do not know. One thing is certain, though. Writing changes. Literature evolves with us, and so does language, idioms, the rhythm of life, the use of catchphrases, the slang, and even morality, in how we perceive and treat things and people are around us. Archaic or forgotten notions may just become weird and strange things that people used to do back then, or they might be completely taken out of context. All of this makes me wonder about my books and those of me peers and colleagues. Are we writing something that may not survive the passage of time, at least not the way we intended?

All of this makes fantasy and science fiction that much more important in the current times. When you’re writing about settings and times that do not really exist, you’re cheating on the test of time, as you allow yourself to jump through the hoops of culture and language that the reality won’t let you. Perhaps this way, we can assure the survival of our works to posterity, so that someone in the 23rd century can still read and enjoy. Maybe laugh at the naivety, the slow unfolding of events, the weird use of primitive technology, and the lingo that no one uses anymore, but they will like the way we told our stories. Or it might be that the actual genre is irrelevant, and it all comes down to a damn good story. Maybe that’s the secret. You tell me.

Igor Ljubuncic is a physicist by vocation, an IT nerd by profession, and a prolific author with eighteen published books since 2011. His current portfolio spans four technical books, nine novels, and five anthologies, including a short story, The Girl with the Flaxen Hair, which was nominated for the 2014 Sidewise Awards for Alternate History!

The Glorious Adventures of Glamorous Prince Dietrich, at your service. 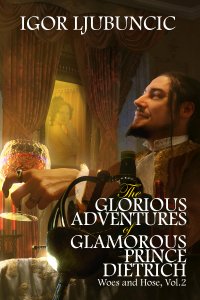 "The Betrayed is an enticing fantasy that should prove very hard to put down, much recommended."
--- Midwest Book Review

"Despite all the completely unsympathetic characters, I couldn't stop reading. It was like watching a train wreck. Truly gut-wrenching and dreadful, but you can't look away."
--- sffworld.com, N. E. White

"Ljubuncic's odious novel takes the idea of the fantasy quest to a new low: Prince Dick is crude, self-involved, greedy, lazy, and completely dishonorable. He has no redeeming qualities and never gains any through his ridiculous attempts to dodge his royal duties."
--- BookLife